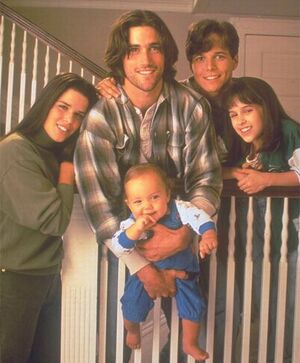 The main plot focuses on the five kids of the Salinger family who have been orphaned after their parents are killed in a car accident. Charlie, an irresponsible 24-year-old worker of odd jobs has to step up and be the new man of the house. The second oldest is Bailey, a 16-year-old responsible team mom (at least for the first few seasons), despite not being the oldest. 15-year old Julia is sensitive, and 11-year-old Claudia is a child prodigy. The fifth is Owen, barely a year old. The siblings all have to take over the restaurant. During the series, they deal with issues like alcoholism, cancer, abuse, and death.

It was Uncancelled after having a poor run with audiences and a favorable reception with critics the first season due to a small pool of loyal fans protesting cancellation.

It generated the unsuccessful Spin-Off Time of Your Life.

Tropes used in Party of Five include:

Kirsten: You know what, I was supposed to call the man about the invitations today. And you know what? I didn't. (claps hands) What the hell!