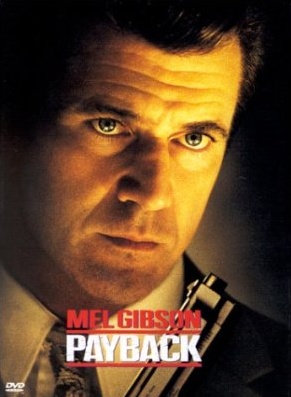 Fairfax: You just signed your own death warrant for a hundred and thirty thousand dollars. I don't get that. What is it? Uh, the principle or something, huh?
Porter: Stop it, I'm getting misty. And tell him it's seventy, will ya? (Turns and leaves)
Fairfax: Seventy?! What do you mean it's only seventy? Seventy thousand? Hell, my suits are worth more than that!

Payback is a 1999 thriller starring Mel Gibson as Porter, a thief betrayed by his partner after a heist and determined to get revenge and more importantly, recover his $70,000 share of the takings.

Six months ago, Porter was a happy man. He was a successful but low profile Consummate Professional thief who specialized in payroll jobs. He was married. He also had a relationship with Rosie, a High-Class Call Girl on the side. Then he agreed to help out Val Resnick, a sadistic crook he'd worked with in the past, to steal some money from the Triads. The job goes perfectly, but it turns out that Val really needed all the money from the job, not half, and that Val had told Porter's wife about Rosie. The result is that when they meet up after the job, Porter's wife shoots him several times, Val takes the money, and they leave Porter for dead.

And just when it can't get any better, Kris Kristofferson shows up.

The film is based on the same source material as Lee Marvin's Point Blank.

Tropes used in Payback include:
Retrieved from "https://allthetropes.org/w/index.php?title=Payback&oldid=1549549"
Categories: