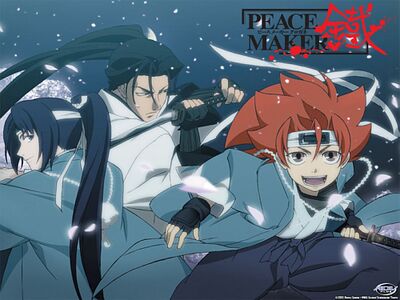 The story is focused on the main character, Ichimura Tetsunosuke, an energetic, short, and very childlike 15 year old. Sadly, he and his older brother (Tatsunosuke) are left to fend for themselves after the vicious murder of their parents. While Tetsunosuke wants to get revenge, his pacifist brother is not so inclined. 'Tatsu' happens to join a special police force dubbed the Shinsengumi, as an accountant, to earn a living, ironically the organization 'Tetsu' wishes to join as a soldier to seek his revenge. This is where the story truly develops during Tetsu's trials and tribulations as a struggling page craving redemption. He develops relationships with all the legendary members of the Shinsengumi army helping them with their various struggles as he constantly battles his own against himself. The story comes to fruition as Tetsu discovers himself and the overwhelming responsibility the power he is searching for holds.

The series is well known for its massive amounts of Fan Service that comes in the form of Estrogen Brigade Bait and Ho Yay / Foe Yay.

Tropes used in Peacemaker Kurogane include:
Retrieved from "https://allthetropes.org/w/index.php?title=Peacemaker_Kurogane&oldid=1962706"
Categories:
Cookies help us deliver our services. By using our services, you agree to our use of cookies.