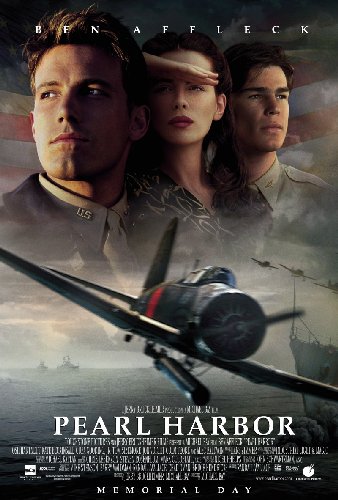 The diabolical Japanese plan to sneak in under cover of Ben Affleck is set in motion.

In this 2001 film, Ben Affleck and Josh Hartnett play two childhood friends, Rafe and Danny, both US Army Air Corps pilots in the months before the US enters World War II. Once Rafe manages a date with army nurse Evelyn, they fall in love. He goes off to fight with the RAF, and gets shot down. Danny comforts Evelyn after they are transferred to Hawaii, and it then turns into a torrid affair.

When it turns out Rafe is alive, he's not too pleased his friend took his gal, and tries to beat him up. The next day, Japanese planes come and attack Pearl Harbor.

The two pilots bravely scramble to their planes, and manage to down a few enemy fighters. After the attack, they get ready to take part in the Doolittle Raid, but still sort of fight over the girl. It turns out she's pregnant. The father doesn't make it. Which one was the father? It doesn't matter, they're all cardboard people anyway.

Okay, the film doesn't entirely focus on this love triangle -- the Japanese preparations for the attack and the Americans' attempts to figure out what they're planning are depicted in parallel, as is the attack's aftermath -- but it did get a lot of critical flak for focusing more on it than the actual historical events. It also got criticism for loads of historical inaccuracies, which The Other Wiki gives a fair list of.

Since this was Michael Bay's first film disappointment -- it was expected to be the big blockbuster of that summer, but was ultimately upstaged by Shrek, of all movies -- he gets a lot of the blame, which isn't really justified. Several factors point to writer Randall Wallace, producer Jerry Bruckheimer, and the studio, just as much, if not more, than Bay.

Tropes used in Pearl Harbor include:
Retrieved from "https://allthetropes.org/w/index.php?title=Pearl_Harbor&oldid=1692379"
Categories: