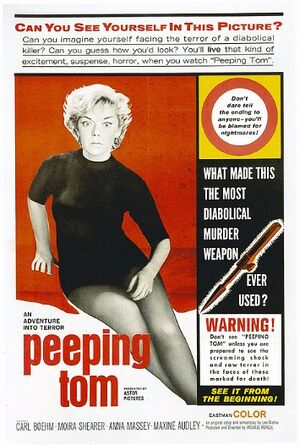 Look out! You're being watched!

Peeping Tom is a 1960 British film by the legendary director Michael Powell. The movie can be considered, along with Psycho, as a precursor of the slasher genre. It also triggered a little controversy.

Mark Lewis is a man who tends to court women, usually prostitutes. They usually consider him some kind of a creep with his obsession of bringing his camera with him everywhere and filming their encounters. But they don't realize the kind of deal he has in mind until they're alone and he kills them with his tripod, but not before frightening them with something that makes them cringe with terror.

Turns out he works with a film crew and is a filmmaker aspirant. Some day he engages in conversation with the family downstairs, and befriends their daughter Helen, eventually forming relationship with her. He shares some of his home movies with her, along with his childhood problems created by his father. Turns out he used his son as an experiment in psychological fears putting him in stressful situations and filming everything with his camera.

The police start suspecting a man who barely talks with other people and has his camera always running (that would be Mark), and eventually they find enough evidence to convict the man. Mark, knowing this, takes cover in his house and when Helen follows him, trying to help him, she finally witnesses what he has been doing. He’s making a documentary, like his father before him, of the fear of death, using a mirror to show the soon-to-be victims their faces full of terror. When the police find him, he commits suicide, giving his documentary an appropriate ending.

The film made such a controversy that it practically destroyed Powell's career. Eventually it was Vindicated by History and now his considered one of the best films ever.

A personal favorite of Martin Scorsese. It's also one of the Greatest Films of Roger Ebert.

“He has his father's eyes.”