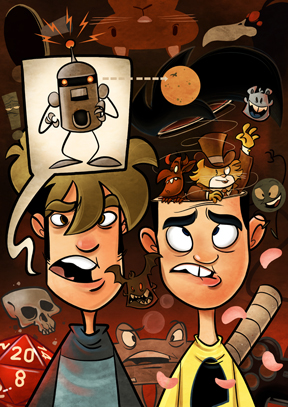 Penny Arcade is perhaps the ur-gaming webcomic, created by Mike "Gabe" Krahulik (art) and Jerry "Tycho" Holkins (writing) and updating on a Monday-Wednesday-Friday schedule. From its humble beginnings in late 1998, the comic has inspired countless imitators and grown into a veritable household name; the franchise has its own convention (PAX) and charity (Child's Play), as well as several commissions.

Although most of the comics are connected to Video Games in some manner, it is not exclusively a gaming comic; much of the humor is drawn from real-life experience, as well as character interaction, both with the authors' alter-egos and with their friends.

Notable for being one of the few webcomics to actually divide up art and writing duties between an artist and a writer, with the pretty obvious result that both the art and the writing are far better than most webcomics, which tend to be solo affairs. While the benefits to dividing up the duties are obvious, the pitfalls keep most webcomics from following suit: mostly, it is really really hard to get two people to agree on how their ideal comic should look and feel, and in the rare cases where they do, wildly successful comics can generate enough money to cause problems between them. Gabe and Tycho make it work. Most webcomic creators would rather not try.

Also notable for a relentlessly professional update schedule in a medium notorious for falling victim to Schedule Slip. Penny Arcade will update every Monday, Wednesday, and Friday -- even when Gabe gets swine flu or cuts his thumb to the bone.

The series has now spun off into an episodic game: Penny Arcade Adventures: On The Rain-Slick Precipice of Darkness. And now into a reality show. The comic has also spawned the Epic Legends of the Hierarchs and Song of the Sorcelator projects. Two podcast series have also been produced. Downloadable content, that gives some insight in the process of how Mike and Jerry create the comics, and their D&D podcasts, which is a collaboration between Penny Arcade and Wizards of the Coast.

It should be noted that the two have been chosen for TIME Magazine's list of Top 100 Influential People for their 2010 issue under the "Artists" category.

Recently, Tycho has starred along with Strong Bad, The Heavy, and Max in a poker game named Poker Night At the Inventory, and the Fruit Fucker 2000 appeared (renamed Juice Bot) in the Steam version of Monday Night Combat.

You broke our website somehow. We are angry. An obliterator-class huntroid has been dispatched.

Retrieved from "https://allthetropes.org/w/index.php?title=Penny_Arcade_(Webcomic)&oldid=1966185"
Categories:
Cookies help us deliver our services. By using our services, you agree to our use of cookies.