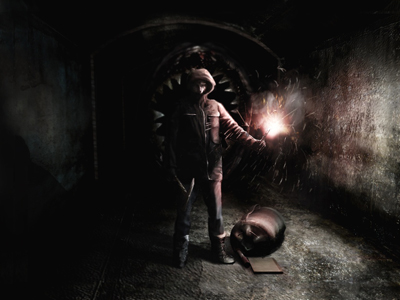 You know, he really should consider looking behind his back...

My name is Philip. If we are lucky, then by the time you receive this, I will be dead. If fate frowns, we all perish.
—Philip during the opening.

Spanning two games and an expansion pack,[1] Penumbra is a Survival Horror that follows physics professor Philip, who, after attending to his mother's funeral, receives a letter from his long dead father Howard instructing him to destroy a breadcrumb trail of mysterious documents without reading them. Phillip, suffering from severe Genre Blindness, instead follows the trail to a forgotten old mine somewhere in northern Greenland, where he promptly finds himself trapped and (seemingly) alone during a blizzard.

Created by Frictional Games (the company that went on to make the equally terrifying Amnesia the Dark Descent and its up-and-coming sequel A Machine For Pigs) Penumbra is also notable for its unique engine that allows solving puzzles through clicking, dragging, and directly interacting when using items, giving an especially genuine, immersive atmosphere that even earned Black Plague a nomination for best script (from The Writers Guild of Great Britain, that it ultimately lost to Overlord).

Clarence: "Christ! Go here, go there, fetch this, run me a bath... typical broad, atypical circumstances."
Red : "Really, the hunger is becoming... rather uncomfortable here... How far away are you ? You cannot be far. I am held captive by a wall of stone in the northeast of the mine. As in any drama, there are many roles to be played. You must act the scientist in mixing potions, act the renegade in plots of destruction..."

Clarence: Simply put... you see what I want you to see.

Clarence: Oh, one thing, before you get too overwhelmed with glee - I know murder can be a lot of fun, but... didn't you quite like that broad? Hey, I think that's a piece of her skull on your shoe. Wait, don't tell me you really thought... I thought you knew I was pulling your leg! Oh my, best laid plans, and all that... this, this is just terrible. Oh, you silly billy... Come on monkey... take a joke.