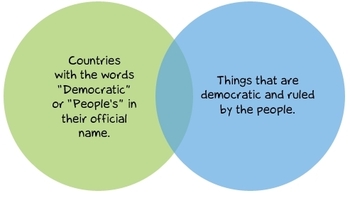 When The Empire tries to masquerade as The Federation, it will often adopt a progressive-sounding name in the process. But often it will go overboard, unable to restrain its own sense of self-importance.

Some regimes will continue this Theme Naming to important buildings and organizations. As a corollary, be wary of any movement, government, or country that is casually referred to by its leaders as "Glorious."

A leader might be cultivating themselves as a Villain with Good Publicity. Or they may believe that their society is genuinely democratic, even more so than (so called) real democracies. Who knows; if they give everyone Bread and Circuses and the Trains Run On Time, people might not even care.

In Real Life it's odd that westerners associate the word "republic" with democracy. It didn't have that meaning originally and now we've got these guys using the name! [1]

Note that "socialist republic" and "people's republic" are terms that communist countries use to describe themselves and communism.[2]

A form of Newspeak. A subtrope of Super Happy Fun Trope of Doom. Definitely Names to Run Away From Really Fast if you can. Given what these governments tend to have at their disposal, that's a big "if." It is often headed by The Generalissimo, or/and Just the First Citizen. If they go so far as to have "elections", see Corrupt Politician.

Examples of People's Republic of Tyranny include:

Retrieved from "https://allthetropes.org/w/index.php?title=People%27s_Republic_of_Tyranny&oldid=1927509"
Categories:
Cookies help us deliver our services. By using our services, you agree to our use of cookies.