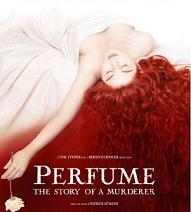 A 1985 Gothic novel by Patrick Süskind, Perfume (or Das Parfüm in the original German) tells the story of Jean-Baptiste Grenouille, an orphan and a sociopath born into 18th century France. It turns out that Grenouille has an extraordinary sense of smell, but, curiously, he himself has no body odour.

Fittingly enough he becomes a perfumer, eagerly learning various methods to extract the smell from all kinds of things. It is then when he decides to create the most perfect perfume ever by capturing the scents of virginal girls, a fragrance so beautiful that all who smell it will think that they're in heaven. Of course, Grenouille has to keep this noble artistic vision a secret from society, as extracting a girl's scent requires killing her.

It was adapted into a 2006 film: Perfume: The Story of a Murderer, directed by Tom Tykwer, most known for his film Run Lola Run. The film stars Ben Whishaw as Grenouille, Dustin Hoffman as Baldini, the perfumer who teaches him the basics of the trade, Rachel Hurd-Wood as Laura Richis, a beautiful and imperiled lady in Grenouille's sights, and Alan Rickman as Antoine Richis, Laura's protective father.

Tropes used in Perfume include:
Retrieved from "https://allthetropes.org/w/index.php?title=Perfume&oldid=1751588"
Categories: