Everything About Fiction You Never Wanted to Know.
(Redirected from Perry Bible Fellowship)
Jump to navigation Jump to search 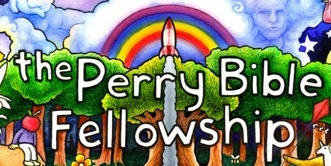 The Perry Bible Fellowship is a newspaper and web comic strip by Nicholas Gurewitch. It's notable for its black, surrealist humour, specializing in juxtaposing whimsical settings with morbid subject matter. It's kind of like The Far Side, except with cutesier art and more murder.

Most of the tropes it encounters, it subverts. Art Shifts are frequent; it goes for either a very intricate or very simplistic art style, depending on the joke. Has a habit of Crossing the Line Twice, and sometimes three or four times. At some point, it will probably ruin your childhood. Maybe your adulthood, too.

Perry Bible Fellowship: The Trial of Colonel Sweeto and Other Stories, a reprint of the original web comic and additional artwork, won the 2008 Eisner Comic Book Industry Award for Best Humor Publication. The comic was on indefinite hiatus, but has resumed updating on an irregular basis, at its regular domain.

Tropes used in The Perry Bible Fellowship include: