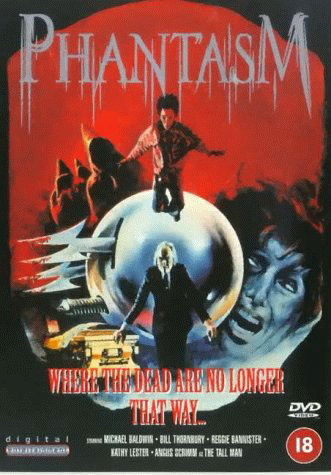 Phantasm is a series of horror films written and directed by Don Coscarelli (The Beastmaster, Bubba Ho-Tep).

An evil supernatural being known as the Tall Man travels from small town to small town, leaving devastation in his wake. Posing as an undertaker, he steals dead bodies and transforms them into dwarf-like zombie slaves, nicknamed 'lurkers'. Pursuing him are the only ones who might stop him: a troubled young man named Mike, an aging, balding ice cream vendor named Reggie, and the few allies they find along the way.

To date, four films have been made, the most popular being the 1979 original, which remains a Cult Classic admired for its atmosphere and originality. With Phantasm II in 1988, the series shifted away from quiet, creepy horror, giving the heroes some cool weapons and upping the excitement. 1994's Phantasm III: Lord of the Dead is more of the same with added comedy, while 1998's Phantasm IV: Oblivion is a lot more subdued, and takes time to explore (if not explain) things hitherto unexplored in the series, such as the possible origins of the Tall Man.

It is fair to say that the rules of cool and scary are the guiding principles of the series. Bellisario's Maxim probably applies. While a coherent plot would have been nice, the films are entertaining enough and brimming with such memorable horrors - the ex-human lurkers, the brain-drilling flying spheres, Angus Scrimm playing the magnificently frightening Tall Man himself - that it hardly matters.

Tropes used in Phantasm (film) include:
Retrieved from "https://allthetropes.org/w/index.php?title=Phantasm_(film)&oldid=1776599"
Categories:
Cookies help us deliver our services. By using our services, you agree to our use of cookies.