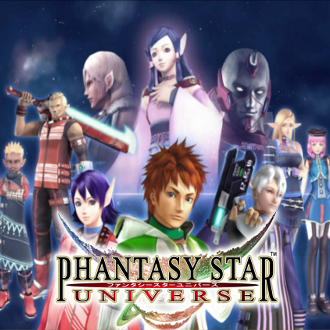 It's a brand new universe.

After the unexpected success of Sega's MMORPG, Phantasy Star Online, the company was eager to try and follow up with a more developed successor.

Phantasy Star Universe was that successor. Universe takes place in the Gurhal System; a solar system composed of three planets and five races. Several hundred years ago, Humans created three races in their likeness to develop the worlds: CASTs for working with computers, Newmen to study TECHNICs, and Beasts for working in harsh conditions. Eventually their creations became societies in and of themselves, and have taken over control of the planets of Parum, Neudaiz and Maotoob respectively. There have been a slew of expansions released as stand-alone games, which are all covered on this page due to their content and placement in a shared timeline.

The series started with Universe for PC , Xbox360 and PlayStation 2 in 2006, roughly six years after Online. On the 100th anniversary of a peace treaty ending a brutal centuries-long war between the races, the Gurhal System is attacked by mysterious alien lifeforms known as the SEED. The SEED infect the worlds, corrupting wildlife and people alike. Caught in the middle of this chaos is the Player Character Ethan Waber, who is convinced to follow in his Disappeared Dad's footsteps and join the GUARDIANS. But it's not simple, as the Gurhal System isn't as squeaky clean as its inhabitants would have you believe, and various organizations seek to use the SEED crisis to advance their own agendas.

A year later, an expansion pack Ambition of the Illuminus was released. This time it took the form of a stand-alone game that replaced Ethan with a player-made character as the main character. While the first half of this expansion ("Episode 2") could be played either offline or online, the second half ("Episode 3") could only be played on the online Network Mode.

Episode 2 is set after the events of Universe and features the Player Character as a GUARDIANS rookie fresh out of boot camp and under the critical eye of their instructor, Laia Martinez. Ethan Waber is on the lam after (supposedly) attempting to assassinate the president of the GUARDIANS. The story concerns Laia's attempts to track him down and unravel a sinister conspiracy created by the secret human-supremacy organization known as the Illuminus.

Episode 3 directly continues the storyline of Episode 2. Having been promoted to Instructor, the Player Character is given the responsibility of tutoring Lumia Waber, Ethan's little sister and new GUARDIANS recruit. However, the Illuminus/SEED conspiracy is reaching its final stages, and Lumia finds herself a target of their plot.

After another year-long hiatus, a new expansion entitled Phantasy Star Portable was released for the PSP. Set between the events of Universe and Episode 2, the Player Character (not the same one from Episode 2 or Episode 3) is a recent GUARDIANS graduate who finds themselves partnered with a new Super Prototype CAST called Vivienne. Together you are tasked with investigating the remnants of SEED activity after the events of Universe, and a mysterious terrorist called Helga Neumann who seems to be directly tied to the attacks.

Eventually Portable recieved a sequel called Portable 2. Set three years after Portable, the Gurhal System's resources have been devastated after the fight with the SEED. With no choice but to colonise other worlds, the four planets band together to research subspace travel derived from Lost Technology. The Player Character (who can be the same one from Portable) is a mercenary who gets hired by the paramilitary company "Little Wing". Together with their partner, the reluctant and lazy Emilia, they discover a dark secret behind the subspace technology that stretches back to the Gurhal System's very origins.

The final instalment of the Universe series came in the expansion Portable 2 Infinity for the PSP. This expansion added on several new missions and a new race called "Dewmans": mutated humans who have been infected by the remnants of the SEED virus. Its new story focuses on one such Dewman, Nagisa, as she searches for some mysterious fragments for a shadowy figure known as Wainal.

With Infinity, Sega begun focusing on a more literal successor to Online in Phantasy Star Online 2. See Phantasy Star for the original tetralogy. Also check out Phantasy Star Zero, another Spiritual Successor that came out during Universe's run.