Everything About Fiction You Never Wanted to Know.
Jump to navigation Jump to search
/wiki/Phelouscreator 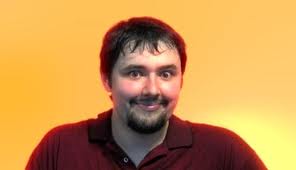 By the time you finish reading this page, he'll probably be dead... again.

Phelan Porteous is a Canadian guy that reviews really bad horror movies. Most of the titles of his videos are parodies of the titles of the movies with his name inserted somewhere. He also produces a sitcom/parody of Mortal Kombat called Mortal Komedy. He makes frequent use of "meta" humor, mocking many of the tropes inherent in the internet review show. He also has his own website, which can be found here, and is a part of That Guy With The Glasses.

Starting with his review of House of the Dead, he seemed to have unofficially decided to start calling his review show "Phelous Who", since that title keeps popping up during a short credits sequence in homage to Doctor Who (and as part of the running gag that he keeps resurrecting as well as various time-related tomfoolery.) However, with his newer reviews, that seems to have been retired (one explanation he gave was that he wanted to make better use of the title cards drawn for his episodes.)

A list of his work can be found here.

Some Guy: Shoot them!
Capitan Kirk: Whaddaya think I'm tryin' to do, ya fucking moron?

Phelous: Looks like she just got a cut off that sharp new release! (Beat) SLICING HER THROAT WITH A RECORD!!!

Hey, why did I record that? Oh well, there's absolutely no chance that I'll edit it into the final video.

Phelous: Yeah I say that to my girlfriend all the time. Glad you're not dead!

Phelous: I guess that means I'll be using that [song] a lot in this review! (Beat) Actually I won't be using it at all.

"Yes, I know! This has been done before, but seriously--why would you put that in your movie?! WHY WOULD ANYONE WRITE THAT?!?!?!"

"Oh, apparently I didn't even need to put his theme in there. The movie's gonna do it for me now!"