Everything About Fiction You Never Wanted to Know.
(Redirected from Philip Jose Farmer)
Jump to navigation Jump to search
/wiki/Philip José Farmercreator 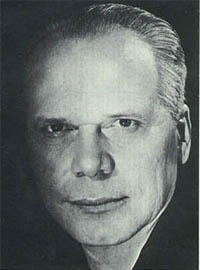 Philip José Farmer (January 26, 1918 – February 25, 2009) was a ground-breaking science fiction and fantasy writer. Farmer is best known for the World of Tiers and Riverworld series. He won three Hugo awards and had many nominations.

Farmer was born in 1918 in North Terre Haute, Indiana and grew up in Peoria, Illinois. He married 1941. His marriage produced two kids and lasted until he died. He tried and failed to become a fighter pilot in WWII.

His early writing career was tough: he was defrauded of substantial prize money. His novella The Lovers (featuring a man who falls in love with an insectoid alien) won a Hugo as "most promising new writer" but was rejected by leading editors as "nauseating". He suffered financial insecurity and had to retreat from full-time writing. He worked in a steel mill, in a powerline crew and as a technical writer, only becoming a full-time writer again in 1969.

During his early writing career, science fiction publishers had an aversion to controversial subjects: sex and religion were out. Farmer's works had a generous helping both with plenty of edgy politics too.

That said, farmer's graphic descriptions of truly out-there sex acts do not pull any punches. Readers who are only familiar with his later, more moderate, work may find his early work challenging in places—particularly Lord Tyger and A Feast Unknown. The controversy over these works stuck in the minds of reviewers and eulogy writers.

More generally, Farmer's approach to sex was the same as his approach to religion, government, politics, gender, everything: get it all out in the open and then make challenging statements about it. He wanted to get the reader thinking and entertain them, not caring who he offended along the way.

The Riverworld series is a good place to start reading. The series has an extraordinarily fertile conceit: in the distant future we are all (all) resurrected by the banks of a river. Everyone who ever lived. Historical figures such as Richard Burton, Samuel Clemens and Herman Goering appear as flesh and blood people and Farmer had the nerve to describe what he thought would happen when their paths collided. (Several of his other works, such as The Other Log Of Phileas Fogg are pastiches, pulling in characters and other elements from several genres—making him a "meta" writer long before it became popular. It's also Steampunk—from 1973!)

In Riverworld, the quest to solve the mystery of the resurrection and the river involves lots of vividly-described action adventure. As prose the action sequences have a great immediacy: combat seems at all times dangerous since the emergent chaos of battle is no respecter of persons.

If you only looked at the early covers of his books he would appear to be nothing more that a pulp writer obsessed with grim-looking, violent and highly muscular men—which is not to say you can't find plenty of plenty meaty heroes in his work. Heroes who often get quite a kick out of a high-wire life of violent escapades.

Riverworld addresses Big Ideas. Sex, politics, race, religion. Farmer loved messing with the divide between high and low culture. The deep problems of human life come up thick and fast in this series. Farmer broke new ground by having these themes coexist with fantasy action adventure—prefiguring Discworld and many other works.

He also tries to explain away both characters' great strength and intelligence by claiming their ancestors were irradiated by a meteor, and that other relatives of Tarzan and Savage whose ancestors were exposed to that radiation include Elizabeth and Fitzwilliam Darcy, Sherlock Holmes, Fu Manchu, and Bulldog Drummond. Farmer is in a class of his own!