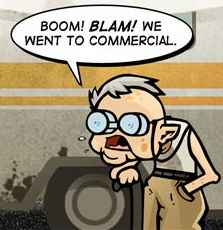 Clearly he experienced all the horrors of war firsthand.

The Phony Veteran is a character who either lies outright about having any military service or greatly exaggerates their rank or achievements. Often, they will at best act as a Hero of Another Story, but are liable to being more of The Neidermeyer or a Drill Sergeant Nasty, ordering others around based upon their (fake) expertise and credentials. Others try to excuse their vicious or self-centered behavior with the claim that they are the Shell-Shocked Veteran.

It's worth noting, that in the United States at least, laws have started to be passed making this behavior illegal.

Needless to say, Truth in Television.

Examples of Phony Veteran include:

Fowler: 644 Squadron, Poultry Division - we were the mascots.
Ginger: You mean you never actually *flew* the plane?
Fowler: Good heavens, no! I'm a chicken! The Royal Air Force doesn't let chickens behind the controls of a complex aircraft.

Man: Did he?
Eddie: Oh yeah, he tripped over the coffee table trying to switch channels.

Eddie: Ah, yes by 'war' I assume you mean Operation Desert Storm, by 'Burma', the Star of Burma kebab and peep show on the Uxbridge road in which you spent the entire conflict, and by 'desperate rearguard action' I take it you are referring to the time you accidentally went into the same cubicle as Mad Quentin Trousers-Down Pervy O'Blimey.
Richie: I was doing my bit Eddie. I was doing my bit.

He tries to blame it all on Vietnam.
But he wasn't there, he was fifteen in '74