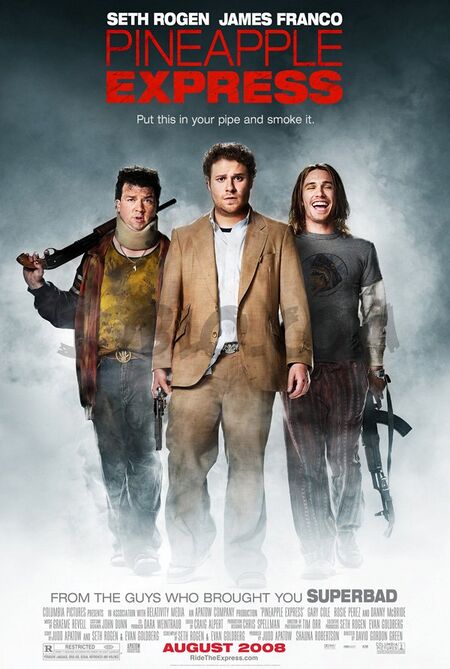 Pineapple Express (2008) is an American comedy film directed by David Gordon Green, written by Seth Rogen and Evan Goldberg and starring Rogen and James Franco with cameo appearances by Bill Hader, Ed Begley, Jr. and James Remar. Producer Judd Apatow, who previously worked with Rogen and Goldberg on Knocked Up and Superbad, assisted in developing the story, which was partially inspired by the buddy comedy subgenre.

Dale (Rogen) is a 25-year-old process server who, in delivering a subpoena to drug lord Ted Jones, witnesses a murder perpetrated by Jones and his girlfriend, a corrupt cop. Dale panics and flees the scene, in his haste dropping a roach containing a rare strain of marijuana known as Pineapple Express - a strain that Ted knows he has sold only to Dale's dealer. Now, on the run from Ted's people and the cops alike, Dale and his dealer know all too well that this is more than weed-induced paranoia - everyone apparently is out to get them both.

Tropes used in Pineapple Express include:

Dale: "Go to the Days Inn downtown. Use a fake name." (Looks around garage.) "Garagely!"

"We aren't very effective when we're stoned - which is all the fucking time.

Saul: "Oh sick! You threw up in my printer."