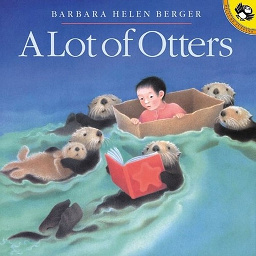 The more the merrier.

"What are you?"
"I'm an otter."
"And what do you do?"
"I swim around on my back and do cute little human things with my hands."

Otters are rather funny-looking animals, what with their long, slender bodies, cute faces, and the way they crack clamshells on their bellies. But makes them even more adorable, is their playful demeanor. Otters often wrestle, slide and play with their food—actually, they mostly use those fun activities as a way to improve their survival tactics. But still, it's a fun way to do it!

When used in fiction, otter characters are usually Fun Personified. They are usually depicted as playful, energetic, kind-hearted, optimistic and laid-back, sometimes even mischievous. Otters spend a lot of time in water, so expect them to be good swimmers, who love to have fun in water. Sometimes this overlaps with Surfer Dude (but otters are usually much more clever, rarely The Ditz).

To recap, if an otter is portrayed in fiction with a joyous, playful or mischievous personality, it's this trope.

Note: This trope is not a list of all otter characters and otter mentions in fiction. It's a trope specifically about otters being playful.

Examples of this trope: