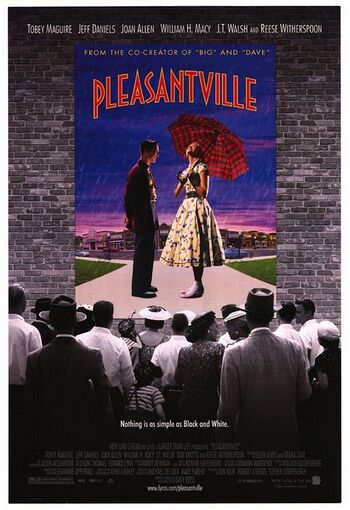 Nothing is as simple as Black and White.

A deliberately Troperrific 1998 movie starring Reese Witherspoon and Tobey Maguire, who play main characters Jennifer and David, a pair of siblings who -- during an argument over who gets to use the big TV in the living room -- wind up Trapped in TV Land due to a strange TV repairman and a stranger magical remote. Specifically, they wind up in Pleasantville, an old black-and-white show portraying the stereotypical 1950s American suburb (along the lines of Leave It to Beaver or Father Knows Best, but even more idealistic). David is thrilled because it's his favorite show; it is a happy world where nothing bad ever happens (as a contrast to David and Jennifer's unstable home life). Jennifer, being more of a party girl, finds Pleasantville incredibly dull and wants to liven the place up. They both want to get home, and David wants to do so without upsetting the community -- but the remote gets broken and the repairman gets antsy and they're stuck.

Their presence winds up throwing the heavily-idealized world into chaos. As things become less idealized and more like the real world, they begin to show up in color instead of black and white -- people cease to be monochrome whenever they stop staying nice and snug within their boundaries and break out, displaying some inner truth about their character (in other words, they show their True Colors).

The movie is clever and well-written, but also Anvilicious in its parallels, and your enjoyment may depend upon your tolerance for such things. For an oddly similar experience in book form, try The Giver.

Tropes used in Pleasantville include:

George: So what's gonna happen now?
Betty: I don't know. Do you know what's going to happen now?
George: No, I don't.
Bill: I guess I don't either.

Big Bob: This behavior must stop at once.
Bud/David: But see, that's just the point. It can't stop at once, because it's in you and you can't stop what's inside you.
Big Bob: It is not inside me.
Bud/David: Oh sure it is.
Big Bob: No it is not.
Bud/David: What do you wanna do to me right now? Come on, everyone is turning colors. Kids are making out in the street. No one is getting their dinner. Hell you could have a flood any minute!! Pretty soon, the women could be going off to work, while the men stayed at home and cooked.
Big Bob: That is not going to happen.
Bud/David: But it could happen.
Big Bob: -changes color- NO IT COULD NOT!!!