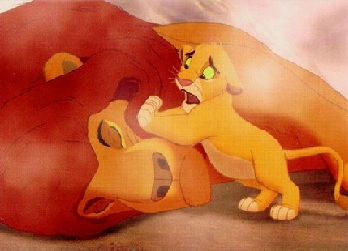 When someone dies, and there is a young character for whom this is the first experience with death. They usually say something to the effect of 'wake up' or 'don't do that, when he wakes up...' Usually implies that the character believes or wants to believe the individual, often their father, is only sleeping, when in fact, viewers are very aware they are dead. It's all the more heartbreaking when it's just after the two have escaped from the danger, just when you think everything's going to be okay...

Even adult characters sometimes exhibit this behavior under stress, or when someone Too Good for This Sinful Earth dies.

Truth in Television, sadly; most young children have difficulty understanding the finality of death and are terrified and confused when they discover people don't wake up sometimes, which does give a little credence to Media Watchdogs being cautious about death on television.

The most common outcome of And Call Him George. Sometimes includes How Dare You Die on Me!. Contrast Talking to the Dead. If the person is unconscious or comatose and not dead, it's Converse with the Unconscious. If the person who sees the death snaps completely, it could develop into a case of Mummies At the Dinner Table.

Examples of Please Wake Up include:

It's not okay at all, of course, as the next scene shows Benson's desk, atop which is her badge with a mourning band and a newspaper headline announcing what most of us already guessed. Then it turns out it is, in fact, OK, but she has to remain "dead" in order to go into Witness Protection. The scene got worse during the final scene: it's all about Alex and Olivia, and everyone else fades into the background. They just look at each other for eons, and then Olivia says,