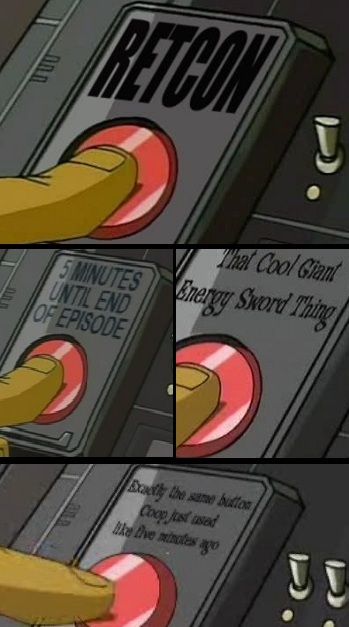 It slices! It dices! It lampshades itself!

"Wow! Just what I needed! In fact, it would seem to me that these give me just what I need at that moment in time! Oh, I see! Context sensitive! Clever!"
—Conker's Bad Fur Day

"The definition of insanity is doing the same thing over and over again and expecting different results."
—Albert Einstein.

It's a decades-old geek joke that the perfect computer would only have one instruction: Do What I Want. In The Future, this will be achieved, so that a character can push the same button over and over and have it do something different each time. (Often a Big Red Button, but not always)

This is most commonly the result of a set constructed with lots of control panels, but no one keeping track of which button serves which purpose in the context of the story.

Examples of Plot-Sensitive Buttons include:

In another ad, office supplies randomly fall from the air—until a family discovers their one-year-old happily playing with a new toy. Current commercials have people trying (and failing) to use said EASY button for things other than office supplies. Staples then actually manufactured these buttons, which simply state "that was easy" when pressed.

Computer: It looks like you're just pressing the same buttons over and over again.
Kaiba: That's because I learned how to hack by watching old episodes of Star Trek.

Padmé: I'm going to help Obi-wan.
Mike: (as Padmé) By pressing the only button on the ship that works!

Hobbes: Oh no, I'm not getting into that box. I don't want to be transmogrified or duplicated or whatever.
Calvin: What? When the TOP is open, it's a time machine, remember?

Additionally, pressing C when no icons are highlighted will make the Tamagotchi do an animation (on the newer toys), for example, coming up close to the screen and waving.

Other labels were "Five Minutes left in the Episode" (because he'd always push it right then), "The Right Choice", and the one time the button was missing it was labeled "Save the World". Which was part of a selection which included "Smite the world", "Destroy the world", and "Destroy the world worse".