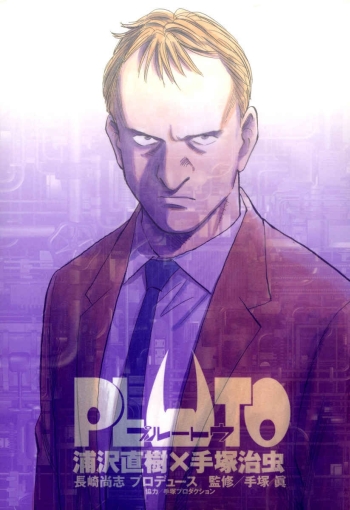 A manga by Naoki Urasawa, the man behind Monster and 20th Century Boys. The story is an Ultimate Universe re-imagining of an old Astro Boy story arc.

In a world where humans and sentient robots co-exist, someone or something is targeting the seven most advanced robots, killing them off one by one. Even more disturbingly, the same killer seems to be murdering humans as well. Only a supremely powerful robot could be killing the other robots--but all robots are hardwired to be unable to kill humans, with one very important exception.

German robot detective Gesicht, who is so advanced as to be nearly indistinguishable from a normal human, investigates the killings in an effort to learn the secret link between the advanced robots and humans being murdered. This is an especially urgent matter for Gesicht, since he's one of the scheduled murder victims...

No relation to the former planet, nor the cartoon bloodhound, nor the Roman god of the Underworld. Okay, maybe that last one.

Universal picked up the rights to make a CGI/Live Action movie in 2010, but no news surfaced since.

Also, this manga is not expendable.

Tropes used in Pluto include:
Retrieved from "https://allthetropes.org/w/index.php?title=Pluto&oldid=1886893"
Categories:
Cookies help us deliver our services. By using our services, you agree to our use of cookies.