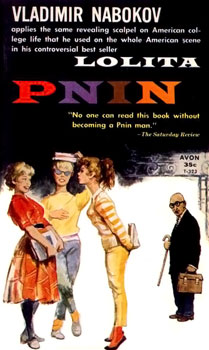 The esteemed Professor Timofey Pavlovich Pnin arrives at Waindell College in New England to work at the school's tiny Russian department, and sadness ensues. Pnin's loose grasp on English stops his brilliance from being appreciated. His heart is tortured by old lovers, dead and gone. He struggles to connect with his grown-up son, his neighbors, and really most of the characters in the book. As the professor observes at one point, "the history of man is the history of pain."

Written by Vladimir Nabokov in installments for The New Yorker magazine, the author's text was at first rejected for being "too cruel." This 1957 novel followed the massive controversy and success of Nabokov's previous novel, Lolita, and Pnin proved to be another best-seller for the author. Pnin is considered to be one of Nabokov's most accessible works- it lacks the detective elements of Lolita and Pale Fire and has a relatively clear-cut story... well, for Nabokov.

Tropes used in Pnin include:
Retrieved from "https://allthetropes.org/w/index.php?title=Pnin&oldid=1763907"
Categories: