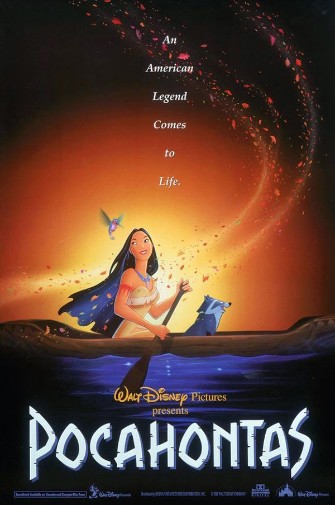 There's something in the wind...

The 33rd entry in the Disney Animated Canon, 1995's Pocahontas was the first (and, other than Mulan as well as Snow White being supposedly inspired by a certain Margaretha von Waldeck, only) one to be inspired by true events. It takes the old legend of the Native American princess who supposedly saved the life of Englishman John Smith and turns it into a musical romance with few roots in the historical record. It literally has more roots in fantasy, in fact — a supporting character is a talking willow tree.

Rebellious Princess Pocahontas has been promised to the best warrior of the tribe by her father Chief Powhatan, but she senses she has a greater purpose in life than this. When English settlers arrive to form the Jamestown colony, she meets the idealistic John Smith, the one member of the group who is interested more in adventure and the beauty of the land than the gold said to lie in it, which Governor Ratcliffe exhorts the others to dig up. Each an outcast among his/her own people, they fall in love.

But both groups are intensely mistrustful of the other -- the Native Americans fear the English will ravage their land and people; the English regard themselves superior to the "savage" natives. When a rendezvous between the lovers leads to the death of her intended at the hands of a settler, John Smith is captured and sentenced to die by Powhatan, and (having discovered there is no gold) Ratcliffe intends to use this as the perfect excuse to exterminate the natives. Only Pocahontas can save both worlds.

This was the first Disney animated feature to arrive after their world-beating success with The Lion King. Though it was a significant hit, it was not on the scale of its immediate predecessors. It also received weaker reviews, with many chiding it for Political Correctness Gone Mad, an Anvilicious approach to moralizing, and now-too-familiar story structure and character types (feisty heroine, handsome lover, animal sidekicks, etc.) And with Toy Story's arrival later in '95, Western animation would never be the same. It is the least well received film of the Disney Renaissance and is the only one to be graded Rotten on Rotten Tomatoes, at a paltry 56% - even The Rescuers Down Under, which was a commercial failure, is still graded Fresh. That said, some of the ill-will this film suffered might be because of its Bittersweet Ending - one of the rare films in the canon with one - and because, as we've already stated, it had the bad luck to immediately follow The Lion King. In spite of its flaws, however, this film is one of the best-looking, most craftily animated Disney movies, renown for it's vivid colors, Scenery Porn and excellent art direction.

The film did warrant a Direct to Video sequel in 1998, Journey to a New World, that applied similar fictionalization to Pocahontas' later life, namely her journey to England and marriage to John Rolfe. Ironically, Christian Bale, who voices young settler Thomas in the first film, appeared as Rolfe in Terrence Malick's rather different telling of her story, The New World -- as did Irene Bedard (Pocahontas' speaking voice and the model for the animators) as her mother -- 10 years later.

Tropes used in Pocahontas include:

The sequel includes examples of:

Retrieved from "https://allthetropes.org/w/index.php?title=Pocahontas&oldid=1922115"
Categories:
Cookies help us deliver our services. By using our services, you agree to our use of cookies.