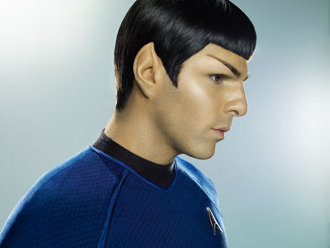 What is it about pointy ears?

For some reason, the fastest, most reliable way to establish someone (or thing) is not human is to give them unusually pointy ears. Whether it be elves, aliens, or stranger fare, having those ears point skyward is all it takes to knock them down (or up) a peg.

The size, shape and length of the ears can vary, and this affects the nature of the species they're on. Normal ears with a slightly pointy tip? Probably a Human Alien, but might be a demon or even vampire, so be on your guard. Long and tubular pointy ears that are a bit ratty? Then it's a filthy monster/mutant that is Exclusively Evil and must be purged with flame. Dog-like ears that move, with tufts of fur? Probably a Beast Man or Wolf Man, back away slowly without making eye contact. Or perhaps long, gracefully arching ears? Then they're obviously elves or something far above mere human, and must be treated with respect and humility because they have all kinds of kickass magic and martial prowess.

Here's a short list of these pointy-eared inhuman hobgoblins:

A subtrope of Unusual Ears.

Examples of Pointy Ears include:

Retrieved from "https://allthetropes.org/w/index.php?title=Pointy_Ears&oldid=1923482"
Categories:
Cookies help us deliver our services. By using our services, you agree to our use of cookies.