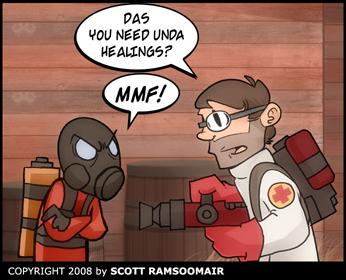 On TV, many foreign people speak a weird mixture of English and their own language, often applying a ridiculous accent to both. As in, "Ich bin ein expert psychiatrist, especially skilled in ein field of phobias. Mmm, very well, mein Herr... please sit down while ich deal with your kleinem Problem." Interestingly, while they have no problems of saying tougher words like "skateboard" and "movie theater" in perfect English, they have to fall back on their native language for words such as "yes" and "no".

They also insert articles before most nouns. If the speaker is German, he will use "ein" (equivalent of "a") liberally, "der" (for "the") less liberally, and "die" or "das" (female and neuter equivalents of "the") rarely. Likewise, Spanish-speaking characters are more likely to use "el" rather than "la", and French-speaking characters almost always use "le". Russians, on the other hand, tend to drop the articles (since Russian has no exact equivalents of "a" or "the".)

This may be because the people who make TV shows assume that Viewers are Morons, and simple foreign words are the only ones the average viewer would recognize; alternately, it could be because they're the only words the writers know.

Not to mention that these characters sometimes impose their native tongue's sentence structure on English ("Please to be restful. It is only a few crazies who have from the crazy place outbroken."), mix up similar-sounding words without realizing it (such as dejected and ejected, for example), and generally mangle English idioms.

See also Gratuitous Foreign Language and As Long as It Sounds Foreign, wherein nobody's supposed to understand any of the words. Has some degree of Truth in Television, as slipping into your native tongue is rather common for those who are not completely fluent with a foreign language. However, the way this trope is often used in fiction tends to be the inverse of the way real people talk—for example, a native English speaker in a Spanish-speaking country will (by necessity) tend to express the complicated stuff in English, and then (as a courtesy) throw in the handful of Spanish words he actually knows, which will tend to be stuff like "please", "yes", or "thank you": "Buenos dias, señor. Necessito un nuevo compression coil para mi hovercraft, por favor. Si, el compression coil. Gracias." It's sort of like saying "I actually bothered to learn some of your language, but unfortunately I can't talk about complicated things yet."

Examples of Poirot Speak include:

Retrieved from "https://allthetropes.org/w/index.php?title=Poirot_Speak&oldid=1931330"
Categories:
Cookies help us deliver our services. By using our services, you agree to our use of cookies.