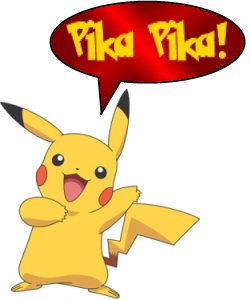 "So, all you can say is your name? Your conversations must be really lame. I know, like, 30 words, and my conversations still suck."

When the Verbal Tic sufferer is pushed well past Smurfing all the way to its logical conclusion and practically becomes The Unintelligible, this is the result. A speech disorder suffered by some types of monsters.

The symptom is repeating its own name or a part thereof over and over. It's especially strange when one considers that dogs don't go around saying "Dog! Dog!" et cetera.[1] Sometimes it's part of an attack or an affirmative of master's commands. Often it's the only thing the monster ever says, which may require Repeating So the Audience Can Hear.

Can be a Justified Trope if the monsters in question made their sounds before people named them, and decided to name them that—which happens once in a while in real life. For example, the Chinese word for cat is Mao. In Egyptian, it's called Mau.

According to the style of writing PoKéMoN in the Pokémon games, Leet Speak and UnrEaDaBLe INTerNet wr1tINg are called "Pokémon Speech" in Poland.

Retrieved from "https://allthetropes.org/w/index.php?title=Pokémon-Speak&oldid=1875825"
Categories:
Cookies help us deliver our services. By using our services, you agree to our use of cookies.