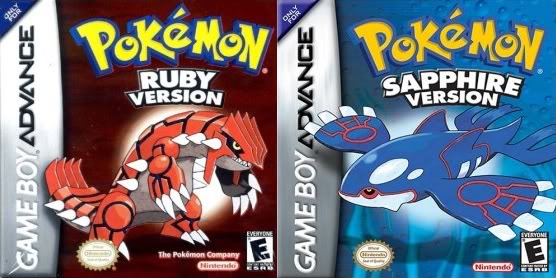 The third set of games in the Pokémon series, Ruby and Sapphire were released for the Game Boy Advance, with Emerald arriving a few years after. Along with FireRed, LeafGreen, Colosseum and XD, they are known collectively as the 3rd Generation. It introduced many changes to the gameplay, such as: natures, abilities, double battles, contests, and over 100 new Pokémon to collect. Along with massive graphical improvements over its predecessors, it also brought a complete overhaul of the data structure, resulting in the games being incompatible with the previous two generations. The games took place in Hoenn, which is based on the Kyushu region of Japan rotated ninety degrees[1].

The game begins with the player moving to their new home in Littleroot Town, where they save Professor Birch from a wild Pokémon. As thanks, he gives the player their own Pokémon, and the adventure begins. Unlike previous installments, the player has two rival trainers: The first is Brendan or May (depending on which gender the player is), Birch's child. The other is Wally, a sickly boy who catches his first Pokémon with help from the player, and who leaves home soon afterward.

On their quest to be the best, players will encounter two villainous groups: Teams Aqua and Magma, who want to flood and dry out the planet, respectively. Sapphire players will become allied with Team Magma to stop Aqua summoning Kyogre, while Ruby trainers help Aqua stop Magma summoning Groudon. Emerald put them both in the antagonist role, with Rayquaza being summoned to stop the chaos.

These games may be the biggest case of One Game for the Price of Two in the franchise, as there is literally no way to legitimately collect all 386 Pokémon without aid from FireRed, LeafGreen, Colosseum, and XD (Oddly, only Ruby or Sapphire). [2]. Due to being released after the "Pokémania" phase of Generations I and II, and before the "It prints money" phase of the Nintendo DS, Ruby and Sapphire were the least successful (though were still greatly profitable) "main pair" of games.

On May 7, 2014, remakes for these games on the 3DS were announced by Nintendo, labeled Omega Ruby and Alpha Sapphire respectively.

Tropes used in Pokémon Ruby and Sapphire include:
Retrieved from "https://allthetropes.org/w/index.php?title=Pokémon_Ruby_and_Sapphire&oldid=1855502"
Categories:
Cookies help us deliver our services. By using our services, you agree to our use of cookies.