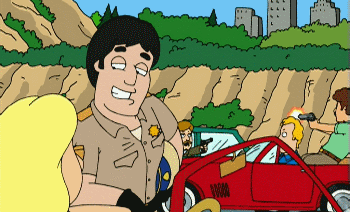 Whenever someone in film or on TV reports a murder, or a monster, or a stalker or whatever, the police come as close to ignoring them as procedure (and the local captain) will allow. And that's if the report is from a respected professional; if they're an Agent Mulder, or worse yet, a teenager, the cops might try to pin charges on them!

If it's a mystery with a respected Amateur Sleuth, the police detective the amateur has to deal with will be, at best, an Inspector Lestrade, and at worst an Obstructive Bureaucrat.

Also common in children's shows, since all Adults Are Useless. They might not even make it to the police station, but just (correctly) assume that no one would believe them.

In addition to police, this trope also covers the military, security guards, and other people whose job is to protect others.

This can apply even if competent law enforcement personnel are part of the main cast if other officers are portrayed this way. This is particularly common in combination with Cowboy Cop, where a character's cowboy status is why he's the exception.

A common interpretation of this trope is merely people not knowing how law enforcement actually works - This was part of why Police Quest was considered one of the most realistic games at the time it was made; because you actually couldn't just take what you thought was the obvious solution because it was either illegal, incredibly dangerous, or both. (Even law enforcement has to follow the law, despite some exceptions and what those games of cops and robbers may tell you.) Many times, the most obvious solution is actually a pretty good way to get yourself or others hurt or killed.

The Awful Truth is that this is sometimes justified - in corrupt cities/states, law enforcement may have been bought out by a corrupt government or organized crime. Someone may cover their tracks well enough or exploit a lot of other loopholes to remain legally untouchable, eg. Al Capone. In sparsely populated areas or small towns, chances are the police aren't numerous/trained/equipped enough compared to big-city law enforcement who have to deal with a lot of stuff on a day-to-day basis. And, of course, some are just standard-issue bumblers.

See also The Only One and Bad Cop, Incompetent Cop, though they are not necessarily incompetent: It may just be that the "calls" are too nonsensical to be believed by someone who doesn't know they're in a show. You Have to Believe Me occurs when the police don't believe the person because the person is presenting their case in a fashion where no one reasonable would believe them. Lemming Cops is another related trope. Contrast I Fought the Law and the Law Won, as well as The Men in Black, who do believe your reports of ghosts/monsters/whatever and probably know more about them than you do, but are still bad news.

Examples of Police Are Useless include:

Shortly after, Langdon manages to convince two Carabinieris to accompany him to the soon-to-be crime scene to stop the killer in time. The van with the assassin and the next victim arrives boldly. The policemen, however, (instead of, you know, calling for better armed reinforcement, seeing how he had managed to kill a dozen others earlier), immediately try to sneak around the van, one by one (not even attempting to sneak in or something). They also are eventually sniped by the killer one by one, who then proceeds pushing his fourth victim into the water unhindered.
Later in the movie, Langdon and the Italian special units storm the presumed criminal hideout. But instead of following Langdon's directions like they were supposed to, they run off into the other direction for no obvious reason, even though Langdon begs them to stay with him. A few minutes later, he finds himself face-to-face with the armed assassin.

Langdon only managed to escape the first time due to an insider helping him, the second time, because a bank director hijacks one of his own armoured money transporters, in which he hides Langdon and Neveau (and convinces the police, that it can only be opened again upon reaching it's destination, Geneva), and the third time, because Teabing and his butler drive them from their property in a badass crash course through an off-track rough forest in their Land Rover, before the police manages to storm the Chateau.
The police in Britain is equally competent. They fail to stop the plane on the airfield, and Langdon manages to get out before the police catches up with the halting plane. Yet, they did manage to dispatch Silas and Aringarosa and to find Teabing, Langdon and Neveau, partially using investigation (but paying with a few injured police officers during the raid of Opus Dei House)]].

Retrieved from "https://allthetropes.org/w/index.php?title=Police_Are_Useless&oldid=1857820"
Categories:
Cookies help us deliver our services. By using our services, you agree to our use of cookies.