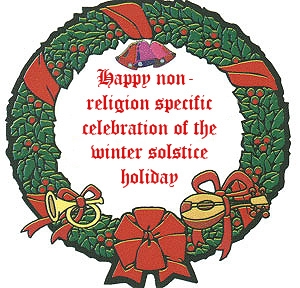 Ah, but they forgot that only the Northern Hemisphere has Winter in December!

This title, taken from a Catch Phrase of the Daily Mail, a British tabloid, can refer to one of two things.

In some cases, this might be literally about political correctness taken too far, presented through a Granola Girl or Soapbox Sadie who embodies the negative aspects of the PC movement.

Alternatively, along the same lines, a governmental authority (often a local council) is accused of being over-zealous to the point of parody in trying to avoid offense to minority groups - not unlike the Culture Police but in the other direction. Certain words or phrases are said to have been "banned", as if Chipping Sodbury Borough Council has any effective power over the English Language or, indeed, anything.

Politically-Correct History is a specific variant where Common Knowledge historical accounts are treated as Fanon to avoid Unfortunate Implications such as Values Dissonance or having to explain Aluminum Christmas Trees.

Usually, a range of urban myths are presented as examples of Political Correctness Gone Mad, such as ...

All of this is especially ironic, considering that Political Correctness took on its contemporary meaning when the radical left began using it as a self-aware joke about the intrusion of Academic (the capital "A" is required) feminist and socialist argot into their everyday lives. Expect most of those invoking Mars and Venus Gender Contrast to imply, if not state outright, that they're taking a brave stand against this trope in the name of Truth in Television.

A slightly more realistic example is the occasional habit of making up false etymologies for innocuous phrases that supposedly have "unenlightened" origins. For example the claim that crowbars were so named after the "Jim Crow" character and came from their use by slaves.[2] "Xmas" is another common target by those decrying the "taking Christ out of Christmas." Xmas as a term dates back over a thousand years; the "X" comes from the Greek letter "Chi", which was the first letter in the Greek word for "Christ". "Tar baby" is an especially unfortunate victim, since it originated in an African-American folktale, and since became a common expression for "an attractive nuisance" or "a sticky problem".

Parodies typically involve stylized Newspeak used in random areas the original does not cover as well as blatant Windmills.

A Fractured Fairy Tale is a "reimagined" Fairy Tale often retold from a Politically Correct viewpoint, Played for Laughs.

This is not a place to complain about minor changes that don't make sense to you personally. When adding examples of changes in works due to Executive Meddling, please stick only to those that render the work nonsensical, change its meaning completely, or miss the point of the work altogether.

News and other Media

Examples of political correctness being parodied

Also, in The Sirens of Titan, the Church of God the Utterly Indifferent has people handicap themselves so that everybody is equal—for instance, a good runner always carries a heavy bag to slow him down, or somebody with good eyesight wears glasses that nearly blind him.

Examples of stories complaining about it

Retrieved from "https://allthetropes.org/w/index.php?title=Political_Correctness_Gone_Mad&oldid=1824271"
Categories:
Cookies help us deliver our services. By using our services, you agree to our use of cookies.