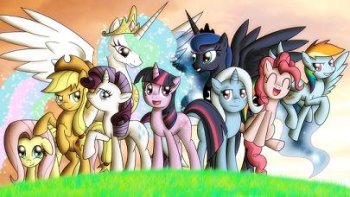 We'll make it through all the worst together/And come out better than ever!

The Pony POV Series is an in-progress My Little Pony Friendship Is Magic fanfiction series written by alexwarlorn (with some work put in by lz0291 and Kendell2 also wrote a few scenes and two songs, as well as several stories written by others in the same universe). They can be read here (first volume, Discorded Ponies) and here (in-progress second volume, Reharmonized Ponies). You can download an e-book compliation of the Reharmonized Ponies stories to date in epub or fb2 format.

The series is divided into two parts:

The Reharmonized Ponies Series itself has some sub-arcs:

There's also the Gaiden: 7 Dreams/Nightmares collection of stories, wherein Princess Luna, Twilight Sparkle, and Pinkie Pie read the journal entries of the seven main G2 ponies, covering the G2 world's change into G3, the Cosmic Retcon of G3, and the collapse of G2 society in the altered timeline through their eyes. Gets pretty dark, but each story tends to lean towards Earn Your Happy Ending territory.

All of these stories have a Darker and Edgier take on the canon events. Discord is far more sinister and evil, his actions have left deep psychological scars on everypony, and there aren't any quick fixes to the damage inflicted. However, the series doesn't take a turn into pure Dark Fic turf and turn Equestria into a Crap Saccharine World; it's clear that all the bad things happening are Discord's doing, even though he's been defeated.

What separates this fic from many of the legions of fanfictions out there is just how HUMONGOUS the fic has become. The author regularly tries to create new chapters at a normal rate so that readers aren't Left Hanging, and the fanfiction as written by him is already over 100 chapters long. And not just short chapters. Average word length can be well over 4000 words in places. In addition, the fic has a core of loyal fans who are dedicated not just to creating new original material (as seen below), but for helping contribute to the core material such as the Dreams/Nightmares section mentioned above. While it does seem to prioritize high writing standards from its many editors and creators, its fandom can also be a little too loyal to the work in the eyes of some.

A group of fans has started a project to make an audio version of the entire series. Unfortunately, the last upload from this project is given as more than 4 years ago.

There are also stories by other authors that have been declared in the universe by Word of God:

These stories are Loose Canon and it's up to the reader rather or not to consider them canon.

Fluttercruel: Shut up shut up! You don't know anything so stop spewing dragon fewmets like you know me or someone you met twice!

Fluttershy: Oh my my my, such language. We're going to have to clean that mouth out.

Mimic: You float one inch towards my daughters I will kill you and seal your spirit in one of my horseshoes!

Fluttershy: I didn't do everything right, I did bad things I don't know if I'll ever stop regretting. Some ponies won't ever forgive me for those things and maybe they're right to. I'm sorry for those things, but I wanted to help ponies, and it looks like I did. And I'm happy I was able to. And for everyone hearing this, if you'll take me back for what I accomplished, I'll accept that. If you won't take me back for what I did, I'll accept that too. I make no excuses, what I did I did and I was being a foal.

Applejack: It involved Applebloom spookin' every Pegasus in armor around, a royal fountain, Applebloom needin' to redefine her meanin' of 'public bath' . . . and Ah think the ghost of a Hippocampus and a lost family locket but Ah kinda ain't sure 'bout them details.

{{quote|Discord: "Oh, but you all LOVED it when Princess Gaia did it! Don't worry, Shadows-Who-Watch, I'm sure you'll be delighted to see me one again doing to all Equestria what I've done to [[spoiler:Diamond Tiara! Isn't that right, my little pony?"}}

Discord: "IGNORE IT! ONLY BAD LITTLE FILLIES WHO DON'T CARE THAT THEIR MOTHER STAYS SICK FOREVER LISTEN TO THAT SONG! IGNORE IT! YOU ARE NOT TO THINK ABOUT IT OR PAY ANY ATTENTION TO IT AT ALL!!!"

A/N: Meh. I think I'll just end the story there, in fact, I think I'll end the entire series right here. Who actually cares about this series anyway? It's all just garbage. Nothing but fan service and rip-offs. And I'm just tired of the whole thing anyway. It's not like anyone would NOTICE if this series suddenly stopped.

Orangejack: You and big brother dearest are Elements Of Honesty, I'm still a liar.

"If they really believed it they wouldn't be saying it every time they said something" -- G3 Pinky & Onyx Tiara
"Put 'em up! Put 'em up!" -- Spike & Discord

Rarity: Reality came down on top of me like Luna's moon fallen from orbit. What had I done? WHAT HAD I DONE-?!

Luna: And every pony that swears themselves to my half of the army KNOWS the conditions for joining. You infuse your troops with a micro-fraction of your essence, I infuse mine the same way. It's written in BIG BOLD LETTERS in 40 size font across two pages with before and after pictures that they'll turn black, become nocturnal, grow dislike to sunlight and exchange feather wings for batwings when they become Night Troopers.

Undead Foal: Don't! The Elements are Harmony, you're Dissonance! They'll destroy you!
Fluttercruel: At least I can say I went out with a bang.

Rainbow Dash: Ick! I don't mind cute, but this is going to make my teeth fall out!

Princess Gaia: "And why would you want to be 'protected' from mama, sweetheart? I just want you to be happy and safe. Just listen to mama's singing and you'll understand."

Golden Tiara: "WHAT DID I ALMOST DO TO MY BABY?!"

Applejack: AH AIN'T SAY YA LYIN'! YA ARE A LIE!

Twilight Tragedy: Don't ask what Fluttercruel does, you don't want to know.