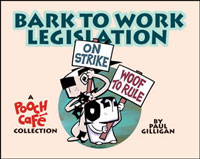 Pooch Café is a comic strip by Paul Gilligan and the first newspaper comic of the new millennium, debuting on January 1, 2000. It follows the humorous antics of a self-serving, squirrel-fearing, food-obsessed, toilet-drinking mutt named Poncho, whose life is with his master, Chazz, and Chazz's cat-loving wife, Carmen (who owns a brood of six cats), and Poncho's adventures with his fellow dogs Boomer, Hudson, Droolia (a female Bullmastiff with a drooling problem), Gus (a Scottish Terrier), Beaumont (or "Bobo", the owner of the titular cafe), Poo Poo (a Bichon Frise), and a zen goldfish named "Fish". Other semi-recurring characters are Tito (the garbage man), Sheldon (a pigeon with a pork pie hat), and Margo (the dog-walker). The strip takes its name from the cafe where Poncho and his friends gather to compare notes about life among the humans.

Tropes used in Pooch Cafe include:
Retrieved from "https://allthetropes.org/w/index.php?title=Pooch_Cafe&oldid=1807088"
Categories: