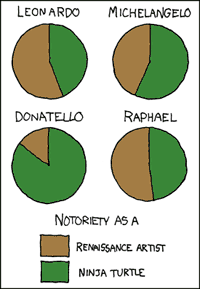 Classics, almost by definition, are works that are considered to be of high quality, are influential on later works, and are widely known. However, one will often find that only scholars and enthusiasts have first-hand knowledge of the material in question, and that the masses know it either only by title or by homages, parodies, direct references and allusions found in more populist works. Essentially, various bits and pieces of high culture are most widely known through their use in pop culture. Ill-informed people might even think these bits and pieces are original to the popular work, and -nine times out of ten - that's terrible.

Pietà Plagiarism exists because of this phenomenon. Most artists would be copying some other usage than the sculpture.

Frequently results in Beam Me Up, Scotty, It Was His Sled, and Covered Up.

Contrast Pop Cultural Osmosis Failure (when someone doesn't get the reference).

Examples of Popcultural Osmosis include:

Retrieved from "https://allthetropes.org/w/index.php?title=Popcultural_Osmosis&oldid=1742319"
Categories:
Cookies help us deliver our services. By using our services, you agree to our use of cookies.