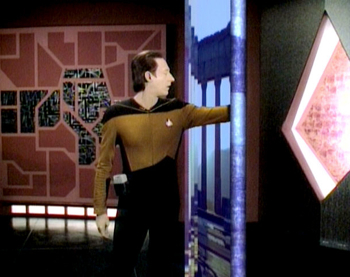 We know you can replace the arm Data, but you still shouldn't stick it in weird places!

This is a door that opens to a location other than the one behind it; in time, space, and even outside of it! This door may be a Cool Gate, but it can be of much more mundane make and manufacture.

How does this door bend space and time like a Dali painting? It may be a technological teleportation device, a Time Machine (or both). It could also be made through magic (which usually justifies it being otherwise mundane looking), and may lead to the Magic Land, Spirit World or Dark World. Lastly, it may be some form of "naturally" occurring gateway of Eldritch origin that leads to an Alternate Universe.

Examples of Portal Door include:

Mordred: Sire, the other side of that wall is the exterior hull of the ship and open space. Where did that door lead to?
Arthur: Everywhere.

That's weird, it's like something out of that twilighty show about that zone.