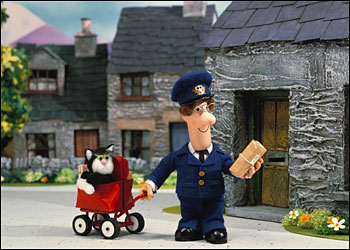 Postman Pat is a 1981 British stop motion series set around the life of postman Pat Clifton and his job as the only local postman for the village of Greendale. He is constantly accompanied by his black and white cat Jess. Fondly remembered by many Brits and considered a essential childhood show. Another version of the show was made in 2004 which expanded on the original concept slightly.

2008 has given us a new spin-off Postman Pat Special Delivery Service an "action packed" version set in the new town of Pencaster with Pat's reliable "PAT 1" red Royal Mail van being replaced by:

First aired on BBC1 and still considered an essential CBBC show to this day.

Tropes used in Postman Pat include:
Retrieved from "https://allthetropes.org/w/index.php?title=Postman_Pat&oldid=1756560"
Categories: