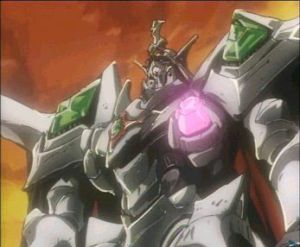 The costliest part of this Humongous Mecha were the five billion carats of magic crystals.

Diamonds are a Magical Girl's best friend. They are also friends to Mons, Doomsday Devices, space rangers, magical knights, Humongous Mecha, and regular old Robots. So if you want something to look highly advanced or incredibly magically powerful, just slap a Mineral MacGuffin on it; just like a normal MacGuffin, it doesn't even have to do anything to be neat!

You see while humanity has been fine for gold and silver to coast by on their prettiness to be worth something, in our fiction we seem intent on making jewellery work for their value and turn them into a universal battery so popular for energy storage it makes the AA look shameful.

In a magical setting, they'll often be called "The Eye of..." and Power Glows will be in full effect. In science fiction settings, they tend to be welcome with the Sufficiently Advanced Alien races. They also can appear in less advanced setting when doing the job of "focusing crystal", not directly making the energy themselves but somehow being able to turn any other energy source into Stuff Blowing Up by having lights bounce around off the internal angles. Your Mad Scientist or Evil Sorcerer will probably be using such a crystal to power his Death Ray.

In a Video Game, these gems are usually the Power Sources and weak points of the robots containing them. They also dim or crack when under a heavy battering, or sometimes even blink like a half-broken LCD display. Robots who are killed will frequently have their crystals dim and go opaque.

Power Crystals may be faceted or completely round and smooth. Depends on the design aesthetic.

Choice spots to bling out your power armor are:

These may not always exactly be crystals or jewels. Oftentimes lenses and emitters also perform this duty, by virtue of their placement.

If extemely powerful, a crystal may be an Amulet of Concentrated Awesome or an Artifact of Doom.

Examples of Power Crystal include:

Retrieved from "https://allthetropes.org/w/index.php?title=Power_Crystal&oldid=1715341"
Categories:
Cookies help us deliver our services. By using our services, you agree to our use of cookies.