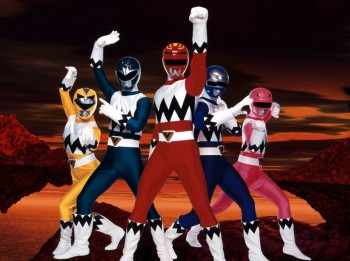 Lost Galaxy occupies an interesting place in Power Rangers continuity. Starting with this season, Saban adopted the Sentai practice of producing self-contained seasons with little or no links to previous years; Lost Galaxy featured a completely new group of Rangers receiving completely new powers and carrying out missions largely independent of previous teams. Having said that, it also maintains some links to the six-year "Zordon Era" that preceded it, particularly in the presence of supporting characters, the Psycho Rangers, and the Astro Megaship. In short, it was something of a Passing the Torch moment in terms of how Power Rangers seasons would be conducted, being something of a Post Script Season to the Zordon Era whilst simultaneously launching the Negative Continuity-style season-by-season approach. Finally, it was also the first time the show averted the "Recruit Teenagers with Attitude" trope it named: four of the six Main Characters (counting the Sixth Ranger) already have accepted positions within the Galactic Space Alliance.

The series also was the subject of much behind the scenes controversy adaptation-wise. Rather than working closely with the creators of Super Sentai to find out what kind of show Gingaman would be, Fox and Saban went ahead with the notion of another space-themed series due to the popularity of Power Rangers in Space. Sadly, what they got was a nature-themed show with horses and the space vehicle zords that they thought were going to be the main Zords became the back-up Zord for the show. Also, problems arose with the cast as one of the Ranger actresses became ill and had to be replaced, the plan for them to bring back the In Space Pink Ranger fell through midway through filming her first episode, and she was replaced with yet another In Space refugee (Karone), although most feel this worked out for the better.

The story starts out with Leo Corbett, younger brother of GSA officer Mike, stowing away aboard the roaming space station Terra Venture. He meets his brother's coworkers Kendrix and Kai, and they're suddenly approached by Maya, an alien girl from the planet Mirinoi. She's come through a wormhole and needs someone to save her people. Leo, Kendrix and Mike immediately agree to follow her, while Kai initially refuses, until guilt convinces him to go hijack the Power Rangers' Astro Megaship and help his friends, with the help of Alpha 6 and Damon.

Once on Mirinoi, Mike, Kendrix, Kai, Maya and Damon pull the Quasar Sabers from their stones, fulfilling the prophecy and becoming the Power Rangers. Unfortunately, possession of the Quasar Sabers is what Scorpius' minions were after, anyway, and this leads to a fight. Mike is killed, insisting Leo save the Quasar Saber instead of him, and Leo becomes the Red Ranger in his brother's place. Scorpius takes the whole thing as a free ticket to attack Terra Venture whenever he wants to get the Sabers for himself and turns the people of Mirinoi to stone. Naturally, the Rangers choose to fight him. But when Scorpius' search turns towards a power called the Lights of Orion, things start getting more complicated...

After its opening episodes attained tremendous viewing figures in the States, the series suffered a ratings dip that made for problems between Fox and Saban. The series was pulled from the airwaves for several months before the last couple of episodes could air, in order to give the time slot to the recently debuted Digimon Adventure dub. It has a few solid fans for the dark, almost poetic stories it told. This is the first series to actually kill good guys, although two got better and the other one got to be reunited with his son, so it was okay by him. Lost Galaxy also started the tradition of bringing back the previous team for a special reunion battle, although that had the effect of canceling out its original Twenty Minutes Into the Future premise (although in reality that ship sailed in the first episode, when Bulk and Professor Phenomenus try and book passage on the Terra Venture).

Retrieved from "https://allthetropes.org/w/index.php?title=Power_Rangers_Lost_Galaxy&oldid=1861635"
Categories:
Cookies help us deliver our services. By using our services, you agree to our use of cookies.