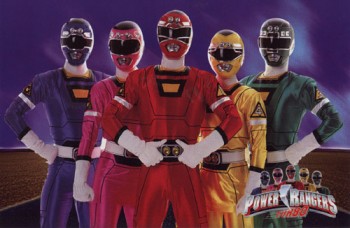 Shortly after the events of Power Rangers Zeo, the Rangers (minus Rocky, who injured his back in training) are charged with defeating the space pirate Divatox, who intends to marry the demon Maligore and gain his power. Zordon tells the Rangers that the Zeo zords are not powerful enough to face this new threat, and gives them new Turbo powers and Zords. Joined by a new Blue Ranger, the twelve-year-old Justin, the Turbo Rangers destroy Maligore, while Divatox swears revenge and heads for Earth.

As the season progresses, Zordon and Alpha return to their home planet of Eltar, to be replaced by Dimitria, an alien with a mysterious connection to Divatox, and Alpha Six, her Jive Turkey robot assistant. Not long after, Tommy, Kat, Adam and Tanya, having recently graduated high school, each choose a successor to serve in their place on a new Turbo team. T.J., Cassie, Carlos and Ashley join Justin to fight Divatox's continuing threat.

The season concludes on possibly the biggest Downer Ending of a Season Finale in Power Rangers history. Both of the team's Megazords are destroyed, their weapons are lost, the Command Center is blown up (again, but for good this time), and the Turbo powers vanish. The Rangers themselves are spared by a last minute summons for Divatox by her leader, Dark Specter. Utterly defeated, the Rangers leave Justin behind and set off into outer space after Divatox, setting the stage for the next season, Power Rangers in Space.

This season is somewhat infamous among fans, mainly because its source material, Gekisou Sentai Carranger was actually a parody of Super Sentai series. Despite this, the writers tried to give the season a serious tone in its first half, leading to jarring mood shifts when the stock footage was used. One episode will be delving into an ominous doomsday message while in another the Rangers are cooked into a pizza. Another polarizing point, the twelve-year-old Blue Ranger, cannot be blamed on Japanese footage. Though it must be said there was a precedent for Kid Rangers in Super Sentai; both Kiba Ranger (White MMPR/Dairanger White) and King Ranger (Zeo Gold/Ohranger King) were children.

Although the ratings for the first half of the season were at an all time low due to a rating decline that had plagued the show since season three, after a Retool the show's ratings began to stabilize, paving the way for the next season to ensure that the franchise would survive.

Retrieved from "https://allthetropes.org/w/index.php?title=Power_Rangers_Turbo&oldid=1914262"
Categories:
Cookies help us deliver our services. By using our services, you agree to our use of cookies.