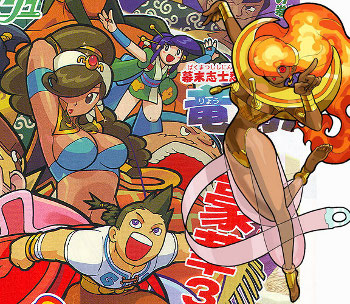 Looks like Wang Tang is getting a different set of Power Stones charged up...

Power Stone is a Mascot Fighter video game series created by Capcom. Beginning with the first game in 1999, Power Stone received only one sequel, Power Stone 2, the following year. The two games were released for the arcade and ported to the Sega Dreamcast, and later to the PlayStation Portable. It also received a 26-episode anime adaptation.

Gameplay in the Power Stone series is unconventional, at least compared to the many other fighting games by Capcom itself. For starters, fights take place in 3-D arenas. Items appear throughout the levels, such as weapons and the titular power-ups-slash-MacGuffins power stones. When a fighter collects three of these, he or she transforms into a powered form for a limited time.

Not to be confused with a certain weapon from Mega Man 5.

Tropes used in Power Stone include:
Retrieved from "https://allthetropes.org/w/index.php?title=Power_Stone&oldid=1610623"
Categories:
Cookies help us deliver our services. By using our services, you agree to our use of cookies.