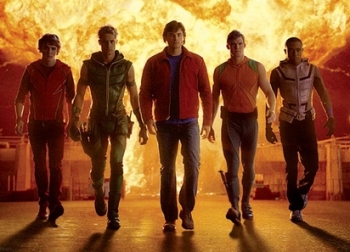 The League of Justice Affiliated Individuals, and their Kid Sidekick, The CW-Lad.

The Power Walk is a wide shot of the main cast, shoulder to shoulder, suited up for battle and looking cool/determined/fierce as they walk towards the camera, often in slow motion. Typically shot from a slightly lower than normal angle to add stature to the characters in the shot. Extra power can be gained from a dramatic backdrop, especially flames or explosions. The walk often continues until the characters are out of frame, and is often followed by an Act Break.

Sometimes (especially when used in the opening credits) called a Hero Shot (although there can be other types of hero shots; e.g. a shot from a low angle to make a character look larger than life)

Can be combined with an Unflinching Walk (as in the Smallville picture) for extra badassitude. If they're standing still, it's the V-Formation Team Shot.

Commonly used as an intro shot of an ensemble cast in TV dramas, e.g. procedurals.

Examples of Power Walk include:

Retrieved from "https://allthetropes.org/w/index.php?title=Power_Walk&oldid=1964517"
Categories:
Cookies help us deliver our services. By using our services, you agree to our use of cookies.