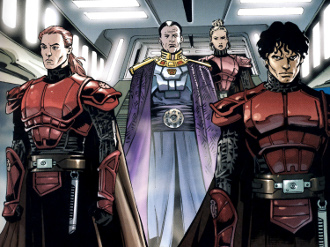 Whenever a story has an army, there's almost always some kind of elite group that serve as the guardians of the leader.

The Big Bad is much more likely to have a dedicated group of elite bodyguards than the story's Big Good or other equivalent-ranking good guy. This might be because the good leader often has a Kirk-like tendency to lead his soldiers into battle, even if logically it seems like a bad idea to have your leader be the first person you send into every potentially dangerous situation. Then again Authority Equals Asskicking. The occasional exceptions form the Hero Secret Service. Another notable exception is any fictional representation of the real-life Secret Service (typically American, but also occasionally Her Majesty's). A princess may also have a solitary male bodyguard that she sometimes finds herself attracted to (and vice-versa).

In Real Life, the Praetorian Guard was a special force originally intended to serve as a Roman general's bodyguard in combat, but the term was later restricted to the elite personal guard of the Roman Emperors. As a bodyguard unit, they proved to be a miserable failure: Nine separate emperors were killed by the guard, and many others were deserted or otherwise messed over by them. In some cases the Guard literally sold the Imperial office to the highest bidder, then turned on their new master when he failed to deliver on his extravagant promises.

Tend to favor Scary Impractical Armor, Bling of War and a Blade on a Stick. Despite their elite status, they have an unusual tendency to stand around not doing much fighting - of course, as long as their boss is keeping out of trouble, that's precisely their job.

Sometimes overlaps with Elite Mooks, Superpowered Mooks, and Amazon Brigade when they are Bodyguard Babes. If they are generally recruited from another nation, they are a Cadre of Foreign Bodyguards. If they never actually go into a fight, then it's just palette swapped normal infantry (the real Praetorian Guard were palette swapped standard legionaries; they wore nice purple tunics). May or may not be under the control of State Sec.

This item is available in the Trope Co catalogue.

Examples of Praetorian Guard include: