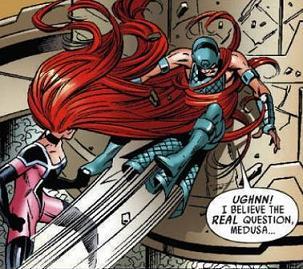 Depending on the sense of realism (or lack thereof) the show or comic expresses, this can act as a Green Lantern Ring, with characters able to form everything from extra arms, to mallets, to chainsaws with just a flick of their hair. Required Secondary Powers are necessary if the hair can support more weight than the wielder's scalp and neck.

A subtrope of You Fail Biology Forever, as hair is, by definition, a filamentous outgrowth of dead cells from the skin. However, there are acceptable justifications.

Compare Expressive Hair, which is when a coif is more inclined to telegraph emotions than to strangle random passersby—although there can be considerable overlap between the two. Even when this type of animate hair isn't in motion, it tends to look like its inanimate cousin Messy Hair.

This is often called "trichokinesis" by fans of settings where it is common. See also Feather Fingers, Helicopter Hair.

Examples of Prehensile Hair include:

Retrieved from "https://allthetropes.org/w/index.php?title=Prehensile_Hair&oldid=1935046"
Categories:
Cookies help us deliver our services. By using our services, you agree to our use of cookies.