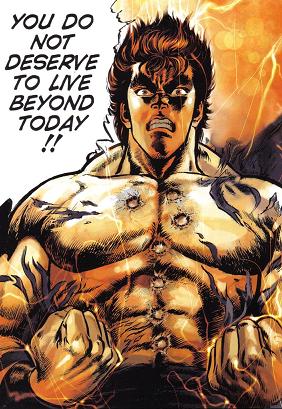 You have just Kicked The Dog one too many times. And now, he's going to make you pay. Explosively.

A very common Stock Phrase, usually said by a villain as he's about to fight the hero. It can also be said by the hero if It's Personal.

Other words can be substituted for "die" depending on the situation and the rating level of the work in question. One common variation is "Prepare to be destroyed!"

Surprisingly, nobody explores exactly how you prepare to die. Perhaps you're supposed to do it by borrowing large sums of money and unloading long term stocks. Traditionally, you did it by making peace with God, hence this line's occasional substitutes, "Say Your Prayers!" or "Prepare to meet your maker!" Still, the person who says it usually never gives them enough time to prepare.

When done against a hero, expect the Big Damn Heroes to swing in at any moment. Sometimes it's the Big Damn Villains instead. A Thwarted Coup De Grace is sure to follow.

Compare I'm Your Worst Nightmare. Contrast Ineffectual Death Threats. Also, contrast Don't Make Me Destroy You, where the character is actually trying to put off the impending death (Or, at least, he is claiming that).

Contrast You Have No Chance to Survive, where the character telegraphs his death threats well in advance.

Other phrases that mean the same thing include "and now you die" and "time to die."

Examples of Prepare to Die include:

Retrieved from "https://allthetropes.org/w/index.php?title=Prepare_to_Die&oldid=1939401"
Categories:
Cookies help us deliver our services. By using our services, you agree to our use of cookies.