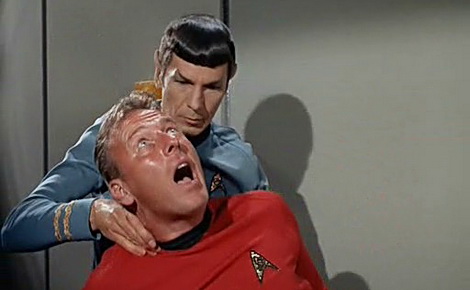 Momma said Spock you out!

The practice of pressing a certain point on a person's body to achieve a certain effect (can also be multiple points in quick succession, or multiple points simultaneously). The most common effect is to paralyze the target or knock him unconscious. For knocking someone unconscious by the less subtle method of a strong blow to the head see Tap on the Head. For the more lethal version see You Are Already Dead.

In martial arts, can overlap with Ki Attacks, as ki/chi flows in the body are supposedly the underlying mechanism of both pressure points and acupuncture according to certain Eastern practices.

Pressure points are also handy if you are trying to avoid someone's death. When trying to stop severe bleeding from one of the extremities, applying pressure to the right area (typically farther up the limb near a joint) can significantly slow the flow of blood to an extremity, allowing time to dress the wound and seek medical care.

Although rarely portrayed in a realistic fashion, the existence of pressure points is decidedly Truth in Television. There are many points on the body that are particularly vulnerable such as nerve clusters, joints, blood vessels, the windpipe, the eyes and the groin. Striking with enough force or applying sufficient pressure to these areas can cause anything from pain and discomfort to severe structural damage and death.

Examples of Pressure Point include:

Retrieved from "https://allthetropes.org/w/index.php?title=Pressure_Point&oldid=1894681"
Categories:
Cookies help us deliver our services. By using our services, you agree to our use of cookies.