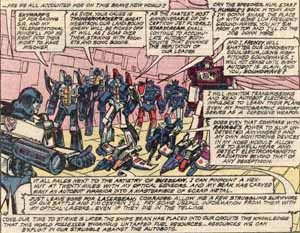 Quick, while the Autobots are vulnerable! Decepticons, SELL YOURSELVES! (Large version)

In a Merchandise-Driven work, there is often a scene or sequence where various characters toys are introduced in rapid-fire succession. This will usually include a brief description or a short demonstration of each character's toy's abilities gimmicks.

Unlike a commercial, where such a hard sell is expected, the Product Promotion Parade occurs in the body of the story/episode/issue itself. This usually happens in an Anvilicious plot-derailing way that leaves no doubt that the only purpose for the scene you just saw was to sell stuff.

May happen Once an Episode, only in the premiere, or on special occasions, depending on the work and the needs of the writers marketing. If the cast is small enough, it may be an Action-Hogging Opening Title Sequence or part of an Avengers Assemble scene.

A subtrope of Product Placement and a variant of Intro Dump. The commercial cousin to Non Sequitur Scene and Manatee Gag.

Examples of Product Promotion Parade include:

Retrieved from "https://allthetropes.org/w/index.php?title=Product_Promotion_Parade&oldid=1541788"
Categories:
Cookies help us deliver our services. By using our services, you agree to our use of cookies.