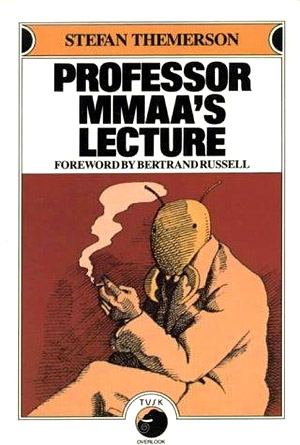 The entire book is a treatise on the dangers of smoking.

A 1943 novel by Stefan Themerson (first published 1953), Professor Mmaa's Lecture is a satirical novel, set within a termite colony.

It follows two plots: one, that of termite academics, studying the physiology and social organization of a particularly fascinating mammal—a bipedal, bald primate known as homo.

But while the insectoid scientists are busy conducting research on living homo specimens and spinning it into university lectures, the termite colony's society—eerily similar to that of humans—is being shaken by social dissent and political games. Mound-shaking events are coming...

A quite amusing and interesting novel, satirizing numerous absurdities of human society while also providing some nice Xenofiction. Apparently, the bilingual author wrote both the English and Polish versions, which do seem to differ a bit. (Note that this trope list is based on the Polish version, and thus might be inaccurate for the English one.)