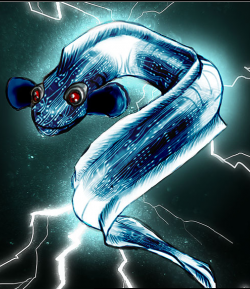 Electric, electronic, whatever powers your boat.

"Electric Eels are cool. Dude, they're animals but they have electric powers! They're like real-life supervillains! They could totally fry you to a crisp, electrify the entire lake, and fire bolts of lightning from their eyes!"

Yeah... that's not exactly how Electric Eels work in reality.

First off, Electric "Eels" are actually not eels at all. They are a species of Knifefish, a group of fish closely related to Catfish, many of whom are electrogenic; they are able to generate electric fields which aid them in hunting for food. There are actually a surprising number of electrogenic fish, but don't expect them to show up in fiction.

Anyway, Electric Eels are found only in South America. They are indeed able to stun their enemies with a nasty jolt - up to 1 ampere, enough to kill a human. They can generate a charge large enough to kill a grounded person, stun a horse or blow out several bulbs. But they don't exactly light up like Las Vegas. Curiously, while electric eels are dangerous for a submerged body, and they do aggressively attack larger animals wandering into water near them (even jumping out a little to touch the limb above water), the latter behavior is optimized to inflict very painful, yet non-lethal shocks: applying current between the limbs could be much more dangerous and maybe easier, but the distinct "cattle-prod" attack allows to chase away one possible predator without attracting all other predators who could smell the body.

In fiction, these fish will be ridiculously overpowered. Furthermore, thanks to the confusing name, writers tend to think actual Eels—a different group of fish entirely—have electric powers (this has led to the asinine belief that eel-skin wallets erase credit cards, when "eel" leather is also made from an entirely different fish). Worse yet, Eels may even be confused with snakes, and may be poisonous to compound the electricity. Furthermore, whenever a Mad Scientist needs to give his monster some extra oomph, he'll give it electric eel powers. Often results in X-Ray Sparks when they attack someone in a cartoon.

Examples of Psycho Electric Eel include:

Retrieved from "https://allthetropes.org/w/index.php?title=Psycho_Electric_Eel&oldid=1552514"
Categories:
Cookies help us deliver our services. By using our services, you agree to our use of cookies.