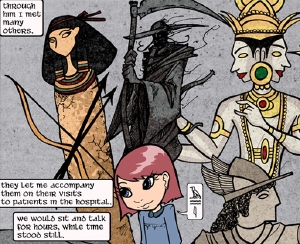 Death is a fact of life, fascinating, frightening, and ultimately mysterious. It's not so surprising, then, that almost every mythology in existence deals extensively with dying and the prospect of a world to come—a process often described in terms of a journey between this life and the next.

Greek for conveyors of the soul, psychopomps are this journey's guides, and they are everywhere in mythology. Most cultures, ancient or modern, include at least one figure with this function; several have many. They are not necessarily personifications of death or judges of the dead, although many are; they may or may not choose the slain, but all escort their charges to the next world. Often they act as threshold guardian figures either to dead souls or to living heroes descending into the underworld. In many cases, it's common for burial rites to include an offering to the guardian of the gates of death.

Like most mythological concepts, these figures have crept into present-day media; hardly a Bangsian Fantasy series leaves the concept unexplored, and most other Fantasy settings at least touch on it. An increasingly prominent subgenre features the protagonists as psychopomps, either as their main job or as an important secondary duty.

Please add examples to this page only if they do not fit one of its subtropes.

Examples of Psychopomp include:

Retrieved from "https://allthetropes.org/w/index.php?title=Psychopomp&oldid=1707251"
Categories:
Cookies help us deliver our services. By using our services, you agree to our use of cookies.