Everything About Fiction You Never Wanted to Know.
< Puella Magi Madoka Magica
Jump to navigation Jump to search 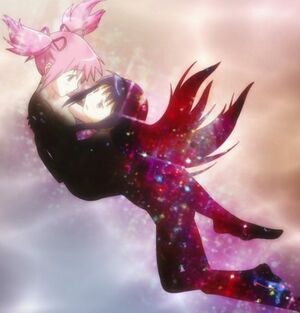 Puella Magi Madoka Magica, an angsty Magical Girl show with an all-female cast, has quite blatant Yuri implications. The show was ranked as the best yuri anime in Japan, beating even Kannazuki no Miko. Go figure. It even has its own page on the Puella wiki.

The most important couple, borderline canon.

The second pairing has a different flavor compared to the main couple.

This pairing was the largest ship before Homura's story was revealed.

Mami x Kyouko has recently gained popularity as a result of 3rd Drama CD, Farewell Story, which revealed that Mami and Kyouko used to be quite close before the anime events.

Not a popular pairing but some fans do ship them.