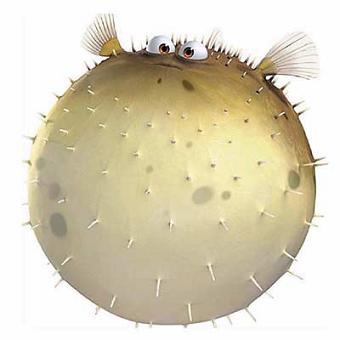 Pufferfish, also known as puffers, balloonfish, or blowfish, are well known to swell up into a ball-like shape as a defense mechanism in order to appear larger and scare away predators. They also have Spikes of Doom to go along with it.

Some pufferfish also have the added bonus of being pretty damn poisonous as well. The majority of their bodies are steeped in toxin, and if you were to eat one, you'd die pretty dang quickly. Course, in places like Japan where people consider them a delicacy, professional chefs have to be extremely careful in cooking them.

Examples of Puffer Fish include:

Retrieved from "https://allthetropes.org/w/index.php?title=Puffer_Fish&oldid=1859115"
Categories:
Cookies help us deliver our services. By using our services, you agree to our use of cookies.