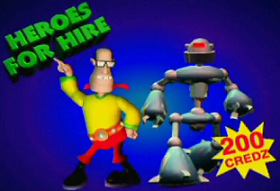 "The fate of the world is in their hands. Sleep tight and goodnight."

"I didn't kill that Yoma to save you; I killed it because it's my job."
—Teresa, Claymore

In many works of fiction, the hero will have to stand up to a large number of villains who aren't really especially bad people; they're simply doing their jobs. The same, naturally, applies to heroes.

The Punch Clock Hero isn't fighting for peace, revenge, or because it's the right thing to do. He's only going against the Big Bad because he has to. In some cases, he is destined to do so but refused the call, only to find out that You Can't Fight Fate. In other cases, he gets involved only because he has bills to pay.

This is usually what happens when a hero is True Neutral. Compare Heroic Neutral, where the heroic character wants to be left alone and only allies with a group (usually the heroes) when their isolation is threatened by an outside source. If the culture becomes toxic, the heroic character can become a Punch Clock Villain.

Only in It For the Money is a subtrope, as is Not in This For Your Revolution.

May overlap with I Was Just Passing Through.

Examples of Punch Clock Hero include:

"There's fifty things going on in this city every second of the day that the Sentry could do something about. And that's just in this city. A bank robbery in Queens is less or more important than a hurricane in Louisiana? How can I choose? I can't. I can't always be where I'm most needed."

Martin Blank: They all have husbands and wives and children and houses and dogs, and, you know, they've all made themselves a part of something and they can talk about what they do. What am I gonna say? "I killed the president of Paraguay with a fork. How've you been?"

Harry: I helped to do it and lived to walk away. But there was an unhappy ending.
Thomas: What?
Harry: I didn't get paid. For either case. I make more money from flaming demon monkey crap. That's just wrong.

Sherlock: Don't make people into heroes, John. Heroes don't exist, and if they did I wouldn't be one of them.

I never cared about justice, and I don't recall ever calling myself a hero... I have always only fought for the people I believe in. I won't hesitate... If an enemy appears in front of me, I will destroy it!

Jack: I don't save people. I kill them.

The price of liberty is eternal vigilance plus a hundred gold per hour, not including expenses.

Tagon: We're hardworking, honest, and true to our word.
Ozvegan Griz: And sometimes you're bound by your word to kill people.
Tagon: But they're almost always bad guys and we only do it for the money.